Well, these past few weeks have been mostly about making music in both of the bands I sing in, Cadaver Club and Setting Off Sirens. The Cadavers had the big Rebellion gig to work up to and Sirens had some legal hoops to jump through and the Monsters Of Rot festival to prepare for.

To warm up for Blackpool’s Rebellion Punk Festival, we thought we’d better book a Cadaver Club gig to shake the rigor mortis from our bodies and the mud from our fingernails. We played the Limelight in Belfast and had a great show. I had decided to video our set to see how gig-fit we were but as I had forgotten to tighten the tripod we ended up with a 45 minute video of the ceiling – pitch black! Anyway, we were in pretty good shape for a bunch of walking corpses and were ready to bring our horror-punk to the seaside!

This festival is a really big deal and one hell of an opportunity for everyone that gets to play it so this group of gravediggers were going to go in “all shovels swinging”. We thought we’d put our war-paint on in our hotel for the laugh and walk down the street like a death march to see what reaction we’d get. We got none! Nobody batted an eyelid. This WAS Blackpool after all, there’s nothing they haven’t seen. 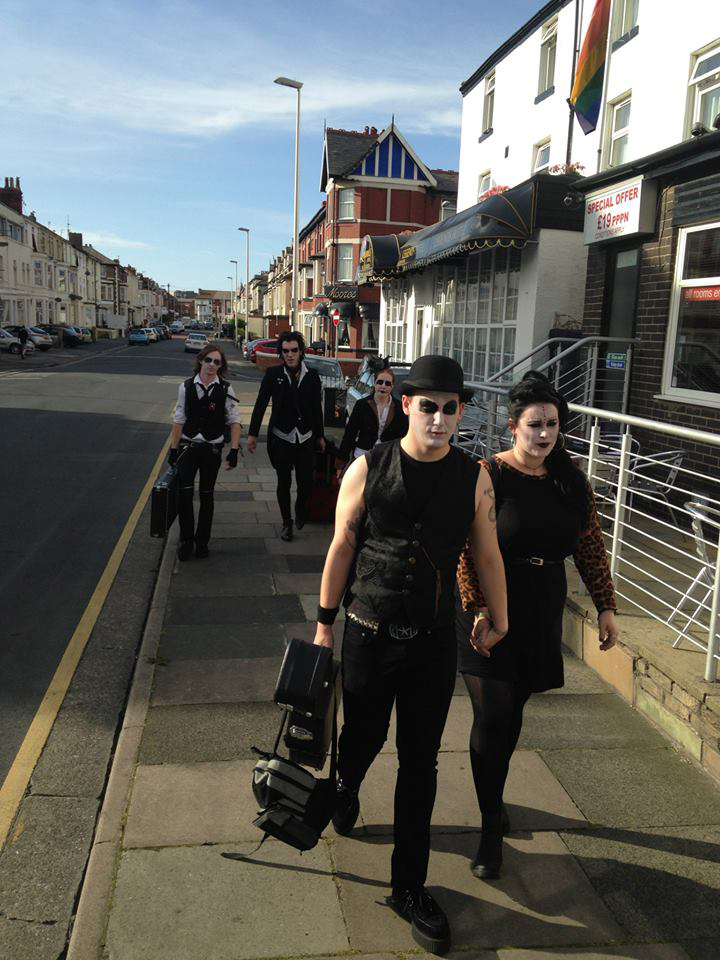 We arrived at the venue and introduced ourselves to the stage manager, Ozzy (not THAT Ozzy). He sorted us out and got everything in place for us. We had a fantastic gig and the audience loved it, especially the troop of Irish hallions who painted their faces up for us and then made their way into Biohazard’s official video of the festival.

They say all the deals are done backstage and it’s true. Just by having a random chat we secured two Irish gigs in October with the Outcasts and the Defects (both fairly legendary Belfast punk bands) and Paranoid Visions, Dublin’s finest.

Back to Setting Off Sirens. Bizarrely, we got word that one of our songs was going to be used as the theme tune to David Badeil’s new BBC radio comedy show. That’s not something we hear every day, especially given the fact our songs aren’t exactly what you’d call radio friendly. Suddenly we needed to sign a publishing deal. In stepped Wipeout Publishing, who handle a lot of punk bands, many of whom we grew up listening to and they did all the hard work. It was one steep learning curve but we actually have a bit of an understanding of publishing now, something that we had been completely baffled about before.

We also had a gig to play, our first in a long time. We were itching to get out there again and the Monsters Of Rot festival gave us the chance to do just that. We played a set that seemed to go by in a matter of minutes and we loved it. We weren’t sure how a punk band like us would go down at a predominantly metal festival but in the usual Sirens style, rather than worrying about it we had an amused curiosity towards the prospect of them hated us. It was all good in the end though, everyone went with it and we had a great time. I love Setting Off Sirens and gigs like that are really fun to play.

The following Monday we got the devastating news that a friend of ours had died. Colin McQuillan, lead singer in Belfast’s Runnin’ Riot had passed away in his sleep. The band were on tour with The Old Firm Casuals, a tour that began at Rebellion and was to travel round England and Ireland for the next two weeks. We had had the craic with Colin and the boys in Blackpool and wished them luck on the tour and said we’d see them when they got back.

Runnin’ Riot are known and loved across the world. They have been there and done it, several times. Colin’s death has left an emptiness in an awful lot of people and I count myself lucky to have been able to call him a friend. My heart goes out to his bandmates, Marty, Ralph and Eden and to all his loved ones. Safe home Colin, may the road rise to meet you.