Some of you will recognise the name of this monstrous sporting outfit in only the vaguest of senses. That’s because I’ve only had the vaguest idea myself of what it is and I made it up!

The Hollowhill All-stars started out as a springboard (pun most definitely intended) for a series of T-shirts I had in my head. I always thought it would be cool to have teams made up of creatures of the night – vampires, Frankenstein’s monster and his brothers and sisters, werewolves and their ilk, competing in devilish games night after night.

Three teams have taken to the field so far – The Howlin’ Wolfmen, The Fiendish Frankies and The Transylvania Drac Pack with many more to follow in their wake.

I have lots of ideas of where I might go with the All-stars including cartoon strips and books which will bring them more to life (so to speak) but the one thing I had no idea about was the official logo for the games. I put this off for ages because I know me and I know how indecisive I can be when it comes to this sort of thing but something came over me last week and I decided I was going to design it straight away. And I did, in just two days in a darkened room with nothing but horror punk as a soundtrack and Halloween on my mind I emerged, tired and hungry with the Hollowhill All-stars Monsters’ Sports Academy official emblem! 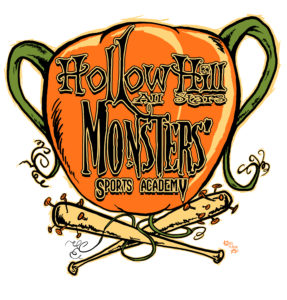